The VT Hunter is an all-terrain, open tactical vehicle with a box frame with self-supporting base assembly, which is protected against hand grenades DM 51 and DM 31 anti-personnel mines. The 3.2-liter sprocket-wheel operated common rail diesel engine is extremely robust with low consumption and can also be operated with L34 (converted kerosene). When using all locks of the AWD - front/ rear axle / central lock - any tension is removed from the drive train by a length compensation. Thus, a long service life of the drive train is guaranteed (high mileage). Through its reduction gear unit all torques in the drive train are extremely reduced and do not strain the drive axes and rotating parts (one of the last vehicles with reduction / transfer gearbox). The VT Hunter can be airlifted openly or in the hold (C130 – 3 pieces, Chinook transport helicopter – 2 pieces, Blackhawk suspension system – 1 piece). With a towing capacity of 3.5 ton, heavy trailers or guns can be drawn as well. The payload of 1.1 to 1.5 ton provides independence over long distances for special missions like surveillance, reconnaissance, patrols and offensive operations. The high-road capability of this vehicle and the speed make it an ideal vehicle for special armed force units. It is equipped in the front and rear with MG-holders and on the roof with a ring mount (mechanical or electrical) with 12.7 gun assembly adapter. In the machine gun tripod is an ammunition box for 300 shot of 12.7 Heavy MG-ammunition. In addition, an ammunition shelving system for up to 2000 shot is installed on the vehicle (can be customized on request), as well as two full sets of fog grenade boxes with double use possibility. Similarly, there are 4-6 sand boards, 1.6 meter long, and 3 with 1 meter, which can also be folded laterally and used as carrier racks or provisional bridge elements, while providing ample room for provisions, water and luggage. Thus, the interior of the vehicle is kept free of luggage. The combined system of a VTTV Tactical Vehicle and 4-8 VT Hunter represents an adjusted tactic to ensure high coverage and extreme flexibility, while it can be relocated in the shortest time with the least effort via airlift, over land or water.

2000 km (with fuel in original/additional
tank plus canisters) 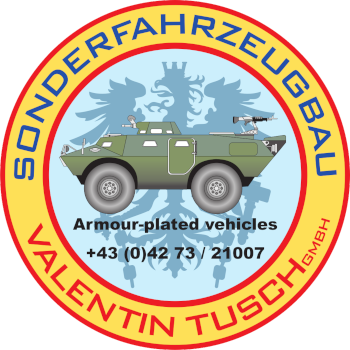